Keeping the lights on

Over the next three years, Peninsula Clean Energy will be investing $10 million to develop short- and long-term plans and infrastructure to ensure communities will have access to potentially life-saving energy, even in the event of a natural disaster. 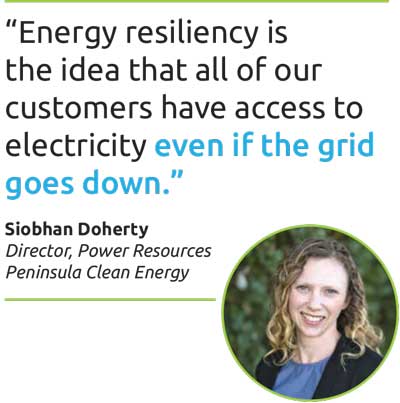 “Energy resiliency is the idea that all of our customers have access to electricity even if the grid goes down,” said Siobhan Doherty, Peninsula Clean Energy director of Power Resources. “It’s important for all types of emergencies. That could be earthquakes, it could be wildfires …anything that might cause interruption of electricity services.”

In 2018, wildfires decimated several Northern California communities. The following year, power companies expanded their public safety power shutoff (PSPS) programs in response. While the purpose of a PSPS is to prevent deadly catastrophes, they can have significant safety and economic repercussions for:

Peninsula Clean Energy has a better plan: Solar power stored in batteries. Solar photovoltaic systems can provide power independent of the larger power grid for long periods by meeting electric needs during the day and charging batteries for power after the sun goes down.

Today, Peninsula Clean Energy is working with municipalities in San Mateo County to place photovoltaic storage systems at the homes of medically vulnerable residents and at public facilities such as community centers that could act as emergency shelter locations. While these plans are currently serving as a contingency plan for PSPS events, Peninsula Clean Energy is also looking to take a proactive approach rather than a reactive response to an emergency. One of the company’s goals is to design a power portfolio sourced entirely by renewable energy by 2025.

“For the longer term, we’re looking at critical infrastructures — such as communications and water — and to figure out how we can best support creating resiliency around those,” Doherty said. “We’re working with municipalities and other local agencies to think ahead instead of going in after the fact … such as designing solar energy and electricity storage that can support their buildings and systems.”

Why energy resiliency is so important

“Energy resilience can be lifesaving for residents who rely on electricity for medical needs. Peninsula Clean Energy’s programs that equip these residents with clean and reliable backup power to support them during power outages will be very helpful.”