Where does the energy in San Mateo County come from?

The project not only benefits the environment, but the California economy too, by creating 400 union jobs. Swinerton Renewable Energy worked with the Brotherhood of Electrical Workers Local 684, Ironworkers Local 155, Operating Engineers Local 3, Laborers International Local 1130, and Northern California Carpenters Local 152 to complete the project.

“This project illustrates the vast potential that solar and other renewable generation can have in Merced County and Central California, from new construction jobs to millions of dollars in new tax revenues,” said Lloyd Pareira, chairman of the Merced County Board of Supervisors.

Where we get power

Peninsula Clean Energy buys low-cost, price-stable, clean and green sources of energy. This includes wind, hydro and solar power from several locations in California. Peninsula Clean Energy’s goal is to develop a diverse power portfolio that meets its objectives of 100% greenhouse gas-free power by 2021, 100% renewable energy by 2025 and a minimum of 20 megawatts of new local power by 2025. 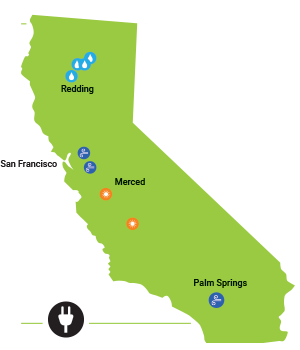 Where are these power sources?